This was one of the coolest events I’ve seen promoted in quite some time.  Five amazing authors: Beth Revis, Marie Lu, Marissa Meyer, Megan Shepherd, and Victoria Schwab held a contest, and the city receiving the most votes would get a visit from this Fab Five.  I threw in a vote for Charlotte and then didn’t think much more of it.  But then I saw a tweet from Beth that Shelby, NC would get a visit.  Shelby is about an hour away, so…SCORE!

Yesterday afternoon, I hit the road in my formerly dark blue car, now green, courtesy of the North Carolina pollen.  I got there an hour early and hung out in the parking lot for a while.  I watched as people wandered around the old school building, searching for an entrance.   I was also desperately trying to get my iPhone working since I’d dropped it – HARD – on my wood floor just as I was getting ready to leave my house.  I had been unable to find my camera, so I was in a bit of a panic thinking I wouldn’t get photos of this great event.  Twenty minutes later, I got it working, and the doors were finally open.

I got a seat in the front row and met Felicia (@FSJourneyToMars).  We’d shared a few tweets in the parking lot: “Is this place open?”  “How do we get in?” “I think it’s open!”  Then the authors began to file in.  Do you get a little overwhelmed in the presence of authors?  I know I do.  You read and love their books, you get a general idea of the kind of person they might be, maybe you share some tweets or e-mails, and then they’re standing right in front of you.  They’re like rock stars to me, so I try to stay cool and collected, even as I snap pics like a paparazzo.

Beth kicked off the event by asking each author to ask a question of the others.  Marie asked to which Hogwarts house each author and her main characters would belong.  Gotta give my disclaimer here: I took notes as best as I could, but I’m sorry if I got anything wrong!  Marie said she would be in Ravenclaw, while Day would be in Gryffindor and June in Slytherin.  Sounds right to me!  Marissa said she would want to be in Ravenclaw, but she knows she would actually be Hufflepuff.  Cinder is Ravenclaw, and Scarlet is Gryffindor.  Victoria is the only self-professed Slytherin in the group, and Beth would want to be in Gryffindor since they have the most fun. 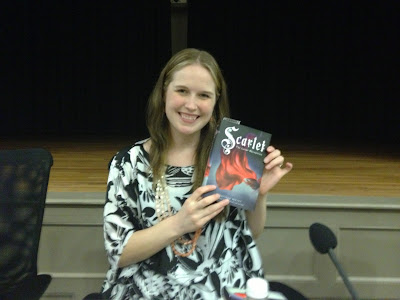 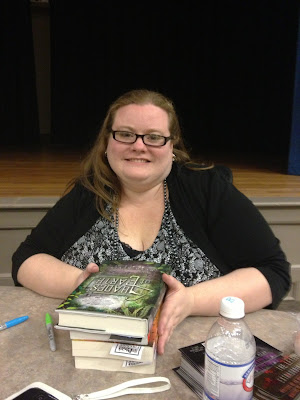 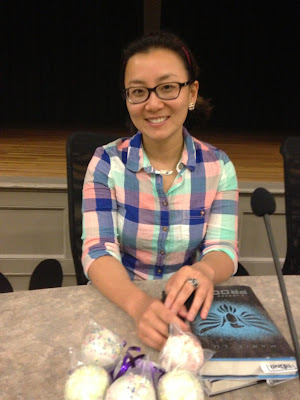 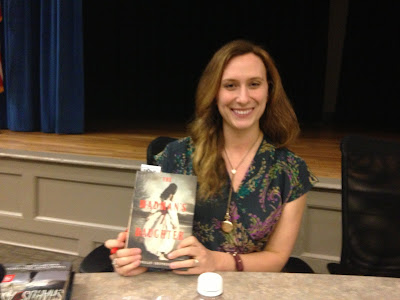 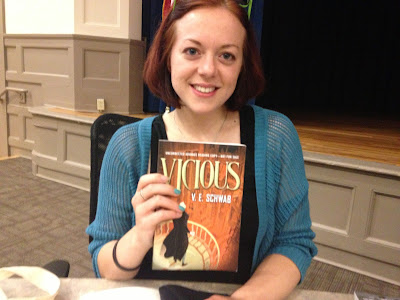 During the audience Q&A, I asked if they could share any fun or scandalous stories from the tour.  Beth told us that she was driving the group and narrowly avoided t-boning another car.  Fortunately, all humans and automobiles were unscathed.  Oh, and I won a copy of Shards & Ashes, an anthology co-written by Beth and Carrie, for asking the question. 🙂  Another audience member asked what they do when they get stuck on a particular plot point.  They said they follow Carrie’s lead, and they think of the worst possible thing that could happen to a character.  And then they do it.
Now, for the REALLY fun part – buying books, getting them signed, and chatting with the authors.  I PROMISED myself I would not go crazy.  Earlier that day, I wrote a healthy check to an AC repairman, with an even more expensive repair looming.  And my washing machine is on the verge of breaking.  But I somehow forgot about all of that.  What is it about being in the presence of authors and their books that makes all sense of fiscal propriety fly out the window?  Fireside Books and Gifts was on scene, and I made three trips to their table to buy more and more books.  I already owned Cinder and Shades of Earth, but I bought the rest of these books to get signed.  You’ll notice two copies of Legend – giveaway alert!! 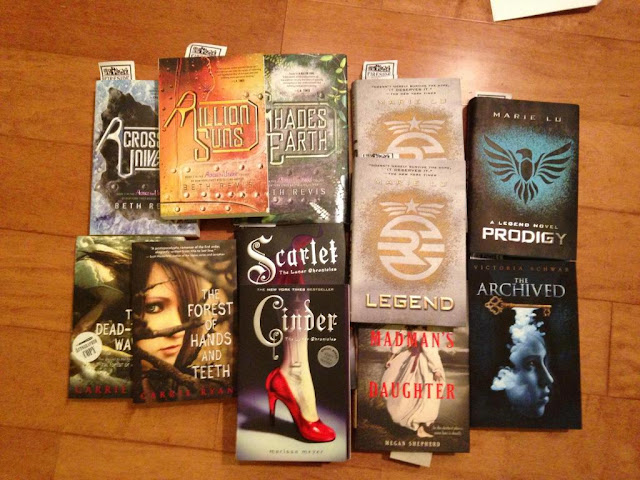 Do you guys get nervous chatting with authors?  I always feel a little tongue-tied, and there are a million things I’d like to ask, but I’m always afraid of overstaying my welcome.  Of course, they’re always so gracious.  Victoria and Megan both recognized me from Twitter (I was thrilled – I’ll admit it!)

You might notice that I mentioned Carrie Ryan above, but I haven’t discussed her yet.  She attended as an audience member, and I took the opportunity to introduce myself at the end of the event.  We discussed our love of zombies, and I think the highlight of my night was when I asked her if she’d seen the British miniseries, Dead Set.  And she said YES!  This is the best zombie show I’ve ever seen (my review is here), and Carrie is the first person I’ve met who has heard of it.  So, I was thrilled.  She signed three of my books, and when I told her that I’d seen a zombie sketch that she made for @Kris10Williams at her blog, My Friends Are Fiction, I requested (or demanded?) my own sketch.  Carrie kindly obliged. 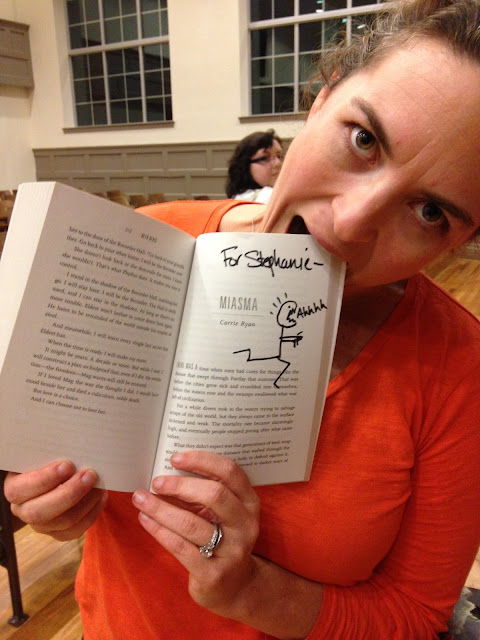 Thank you to all of these amazing ladies for holding this event in support of their readers!  Hope to see you all on tour again!

28 Responses to “Beth Revis, Marie Lu, Marissa Meyer, Megan Shepherd, Victoria Schwab, and Carrie Ryan – All In One Place. Oh, and I was there, too.”