This is the part where I make a few complaints regarding my BEA experience, and you shake your head in disbelief and disgust, and think, “What is WRONG with this woman???”  I know it, and I’m still going to say it.  First, BEA HURTS.  Most of it (OK, all of it) is my own fault for being woefully out of shape and unaccustomed to walking around all day hauling a huge pile of books.  (I know, guys, I know.  I just rolled my eyes at myself as I typed those words.)  I hurt everywhere.  But my insatiable desire for more books pushed me on.  OK, enough complaining.  Let’s talk BOOKS!

I attended the BEA Children’s Author Breakfast this morning with Octavia Spencer, Veronica Roth, Rick Riordan, and Mary Pope Osborne.  All of them were wonderful speakers.  Octavia, Rick, and Mary had the crowd laughing out loud, and Veronica’s speech was sweet and heart-felt.  I just realized that the notes that I took were somehow lost in the shuffle.  But Veronica talked about humility and how criticism has made her a better person, even when she struggled against it.  Mary talked about some funny letters she received from young readers.  And, um, I’m embarrassed that I’m drawing a blank with Rick, so let’s move on.  BTW, we did get some loot.  I was tempted to tell you that we got Allegiant, but that would have been cruel.  We did get copies of Divergent and Octavia’s children’s book, a Heroes of Olympus t-shirt, and a mug from Mary’s Magic Tree House series.  Here’s a hard-to-decipher look at the cover reveal for Rick’s new book.  (Sorry, it was the best I could get from the distance): 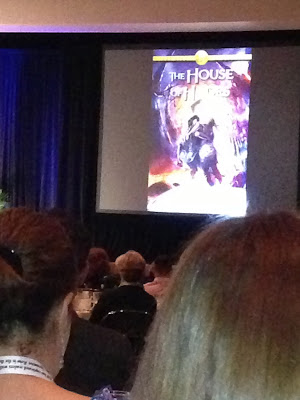 After that, it was a mad dash for the galley drops and the early signings.  All occurring at 10:30 were Gameboard of the Gods, Something Strange and Deadly, and Once We Were.  I got on a long line for Kat Zhang, and it became clear that it was going to be a very long wait and that I would potentially miss out on 11:00 signings.  I hopped out of line and checked out Rose Under Fire, but that line was also very long.  I decided to just see what was happening with the three I abandoned earlier, and guys, I got all of them!  Plus Rose Under Fire!  Here’s what I learned: Even though people start creating lines early for some signings (as in 2 hours early, in the case of Vicious), once that initial rush dies off, you may find just a few people on line in the final minutes of the signing.  That’s what happened with these four.  I was particularly shocked when I walked up to Richelle’s line and waited all of two minutes.  So, with a couple of exceptions, this was my strategy for the rest of the day.

You might remember that I previously mentioned wanting to meet Julie Kagawa.  Because I knew she is also signing tomorrow, I decided to forego her signing so that I could take a shot with the other authors above.  My strategy was working so well that I thought I could show up near the end of her signing and snag a book.  No dice – they were all out.  Will I have luck tomorrow?  We will see!
Vicious is a book I’m sure most of us want.  I was not going to take my chances on this one, so I headed over an hour early to join about thirty other people already on line.  These waits are always a good chance to have a snack, chat with others on line, and plot out my next plan of attack.  And, guys, I’m so excited to have Vicious!

I’d heard Grumpy Cat was going to be at BEA, so I had to have a look, and it was probably one of the funniest things I’ve seen.  Not Mr. (or Ms.?) Grumpy, but the security detail approaching Secret Service levels that surrounded Grumpy.  There was quite a commotion as people tried to get close, and the “bodyguards” politely, but firmly and repeatedly, insisted people who wanted a picture get on line, and they did their best to block everyone’s view.  Of course, no one listened.  And here is yet another one of my blurry pictures.  I love how the woman near Grumpy looks grumpy, too. 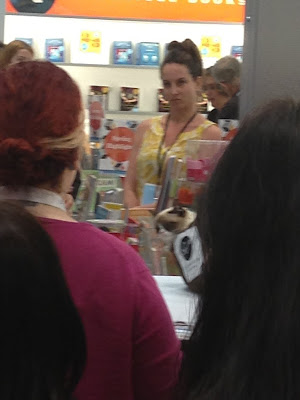 I scored some more of my coveted books including: Fire With Fire, The Rithmatist, The 100, The Infinite Moment of Us, Altered, Hero, Hostage Three, Parasite (Mira Grant), and Wild Cards.  Books I missed out on include: The Coldest Girl In Coldtown, This Song Will Save Your Life, Two Boys Kissing, PODs, and All Our Yesterdays.
My suitcase was once again stuffed to the gills, and I still needed a way to get them to North Carolina.  By 5 PM, I was hungry, sore, tired, and not looking forward to venturing out into the 90 degree heat.  My brother has been a lifesaver this week, and he left work to meet me with a nice, big box.  He hauled my suitcase to the Post Office while I limped along behind (sore feet combined with pinky toe blister).  This was the biggest Post Office I’ve ever seen, and the crowd matched.  The waiting game continued, and I settled in for an hour before it was our turn.  By the way, guys, remember that Media Mail is your friend!  Always request it when shipping books or DVD’s, and you will save about 50%.  My massive box of books was only $20.
It’s 10 PM now, on the eve of the last day of BEA!  I still haven’t completely figured out how I’m going to get from BEA to the airport for my 7 PM flight.  But I’m more concerned with meeting Julie tomorrow.  The doors open at 9, and Harlequin has a massive signing with all of their authors at 10.  My general plan is to barrel through the doors and head straight to Harlequin to wait for 10:00.  I’m worried that everyone else will have the same idea, so I will say it now: If I push you out of the way, I’m sorry!

I’ll end with one funny story.  During the Rick Yancey signing, I was poking around close by, looking at some of the galleys that were stocked on the ground.  I heard someone say something like, “I KNOW that girl in the purple shirt isn’t doing that!”  Well, I was wearing a purple shirt, so I whipped around and said, “Are you talking to me?”  No…she wasn’t.  She was referring to another woman in purple who apparently got a little too close to (unknowingly, I’m sure) butting into the Rick signing.  Crisis averted.  Th moral of the story: You can take the girl out of New Jersey, but you can’t take the New Jersey out of the girl.